How to Stay Committed to Your Goal

Last year, I was working with a client I’ll call Lee. He was a young guy, new to New York, and working his way up the ladder in the publishing industry. He worked a ton, and he was exhausted all the time.

He knew he was going to burn out if he didn’t get more sleep. When he came to see me, he’d already resolved to go to bed earlier.

“Great,” I said. “What’s one thing you can do to make that happen?”

“Well, I’ve read that it helps if you put away electronics an hour before bed,” he said. “So I’d like to commit to doing that.”

Like many of us, Lee started off well. The first night he turned off his phone, iPad, and computer, and put them in his office. He fell asleep later than he’d hoped, but more quickly than usual.

The second night he followed the same routine, and the same thing happened. Soon, he expected, he’d become a morning person.

Only he didn’t. The next week, he had to work late every night, which meant he was on his computer till midnight. When his alarm went off, he was exhausted and stressed – and now he was beating himself up for not sticking to his goal.

“Let’s back up and look at what you really want,” I said. “Is going to sleep earlier really your goal?”

“So I’ll be less tired during the day.”

“Let’s back it up even further,” I said. “Tell me about the first time you thought, ‘I should go to bed earlier.'”

It was one morning when Lee’s alarm went off at 6 a.m., though he hadn’t fallen asleep until 3. He felt exhausted and desperate. “I’ve got to do something different,” he thought.

Do something different. That’s at the heart of it, when we commit to change. But often, we decide on a change that might not be the one we need.

We talked some more, and Lee discovered that while yes, he needed more sleep, the best way to do that wasn’t to go to bed earlier. A lifelong night owl, he rarely fell asleep before one a.m., no matter what room his electronics were in.

“You know what I’d really love? A later start time,” he said. So he talked to his boss, and he was able to modify his schedule so he could go in at 10am instead of 8:30. He had to stay later, but that was okay – he felt more awake in the evenings anyway.

“This fits with my internal clock,” he told me after a month on this new schedule. “I don’t have to force myself to an earlier bedtime. I can wake up at eight, not six. I’m more productive, and I’m not falling asleep at my desk. It’s working out great.”

Does that ever happen to you? You commit to a goal – only to fall away from it when the novelty wears off?

That can happen for a lot of reasons, but one big one is what Lee experienced: the goal he set wasn’t really what he wanted. Which made it really hard to stick to.

When you commit to something, you put a cycle in motion. The cycle looks like this: 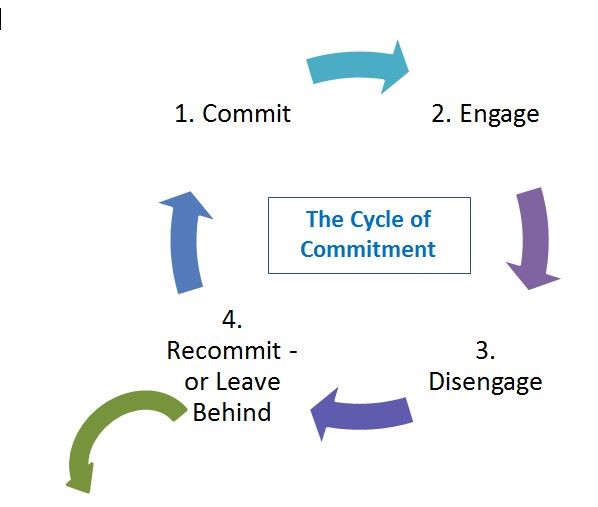 It’s only natural that initial motivation will fade. That in itself doesn’t mean it’s the wrong goal for you. What it means is that we’ve come to a choice: recommit, or move on.

I invite you to call to mind a goal you’ve set for yourself, that’s fallen by the wayside. (Maybe it was your New Year’s Resolution – remember that old thing?)

Take a deep breath, and ask yourself, Is this goal right for me?

Is it what I really want?

If you’re not sure, back it up. What’s the real cause? What’s at the root of the change I want?

Do I want to recommit to this goal?

Listen to any answers that come up, and note where you feel them in your body.

If those feelings are telling you no or let it go – know that you have the choice to do that. With no guilt, no looking back.

If that feeling says Go for it!, Yes! Do this! then there’s your answer. Even if you abandoned it before, even if it got hard—you can always recommit. And guess what: even just by asking that question, and getting that answer, you’ve already begun to recommit.

Now, to stay connected to your goal (whether new or old), you’ll have to keep making that choice to recommit. You have to connect, again and again, to that longing your body expressed a few moments ago.

And that’s easy. Try it now – close your eyes. Take a breath. Ask yourself, “How will keeping this goal bring me joy and let me shine?” Ah, there you are, in your mind’s eye, laughing with friends. Looking amazing. Getting an award. Whatever it is for you, let that vision become a part of you.

Bring it to mind every day, several times a day. That will keep your commitment fresh and new. Don’t be discouraged if it gets difficult. Just remember to get at the heart of what you want, and recommit. Again and again.

Have you experienced this before? What happened?

I’d love for you to tell me below – and then go out and shine.